During my recent wisit at HK factory in Oberndorf I had opportunity to see and shoot newest installment of HK416 assault rifle, designated HK416A5. While HK has something more in works, this version is to become new standard for some time.

While every year some manufacturer comes up with "HK416 killer", this child of M4 and G36 seems to still be alive and kicking. HK416 is in worldwide use by military (including or mostly by special forces units) and law enforcement. Those users give HK feedback or request some features. What HK want to accomplish is to put most of this requirements in one, standard package, called HK416A5. Most of this features come from M27 IAR, HK416"Norway", G28 or IC candidate, but of course has all previous features like firing pin safety and Over The Beach capability. In next paragraphs I will try to describe this features.

Read more »
Posted by Montrala at 23:39 7 comments: Links to this post

Last week, thanks to HK and Cenrex companies and my friend Leer, I had opportunity to visit HK factory in Oberndorf am Neckar, Germany.

Among different interesting things was short trip to the range. I had opportunity to shoot numerous of different firearms there. Strongest impression was made by shooting long handguard HK417 in full auto. Not overly heavy and very controllable. Also MP7A1 put a big smile on my ugly face ;)

But mostly I wanted to try new German Army DMR rifle - G28. This is great package, but if you think other HK rifles are heavy, after trying this one, other feel like kids toys.

Posted by Montrala at 22:39 No comments: Links to this post 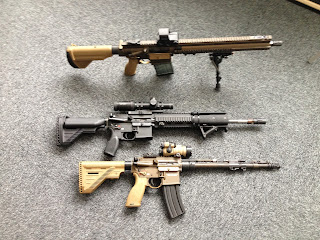 I packed my MR223, took it in my car and 14 hours later I arrived to Oberndorf am Neckar in Germany. I wanted guys at HK to have a look at some issue that developed in my MR223. I was assured that issue is of purely cosmetic kind and will not affect rifle function (I will cover that later). By the way, I had opportunity to see and fondle some cool stuff. Tomorrow I will be able also to shoot some more cool stuff. As a teaser, photo of my MR223 from family reunion - with newest (that the can show) HK416A5 and HK417. Enjoy!
Posted by Montrala at 15:57 No comments: Links to this post