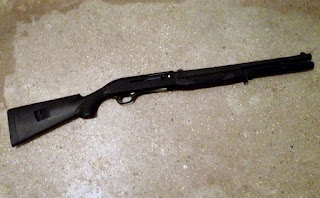 Since I become a father less than 2 months ago, I decided that a Fathers Day gift is in order :)

And I found this unused Benelli M1 Super 90 shotgun, with 18.5" barrel and 7 round tube laying behind shelves of one nearby gun shop. 2 visits at Police HQ to get paperwork, stop by ATM machine (it is easier to negotiate price with hard cash in hand) and after visiting gun shop I have my gift, that I bought myself in from my kid. Isn't Fathers Day nice idea?

Posted by Montrala at 23:26 No comments: Links to this post

Email ThisBlogThis!Share to TwitterShare to FacebookShare to Pinterest
Labels: Blogging

Pictures of my HKs, but not only them

I decided to take some photos, to show people what I shoot most of the time. It gave me some opportunity to play with some camera software on my smartphone. Please forgive me poor quality and toying with effects and filters. So here it goes: 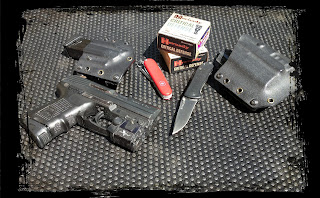 HK P2000SK in 9x19mm with 6lb LEM trigger. I added also HK45C magazine release. This is huge improvement over standard magazine release. I have Meprolight night sights, that soon will be changed for new ones - tritium inserts are coming to their end. Magazines are equipped with Pearce Grip PG-2733 extensions. Those are intended for Glock 27 and 33, but modified work fine with P2000SK. They give much better grip on pistol, without adding much to size and +1 capacity. Most of the time pistol is equipped with Viridian C5L green laser and light combo. I think C5L is perfect package for subcompact gun. Only if Viridian come with more reassuring mounting solution. All this stuff sits nice in Raven Phantom holster and magazine pouch. Holster is configured for OWB carry, but I also configure it for IWB and even AIWB. I do shoot it sometimes in IDPA SSP (with C5L removed) and in 3Gun Liga Sportera. My trusty P2000SK is now oldest in my inventory and it never let me down. I totally trust this little beast.

Read more »
Posted by Montrala at 00:14 5 comments: Links to this post

Yesterday we went, together with Grzehoo and Obione (ATom joined later), to newly opened shooting range in Obuchowo, near Morąg (Poland). This is former military range that after 40 years of no use was just revived by new, private owner. We were first shooters to use this range. It has four 25m bays and two 300m bays (one 36m wide, second 3m wide for zeroing purpose).

Read more »
Posted by Montrala at 00:35 No comments: Links to this post