Last weekend I had opportunity to try Mini Beryl on smal 3Gun Liga Sportera match (shooting IDPA targets@50m on video). I do not have prior experience with AK platform, even less with short one. I mostly shoot G3 and variety of AR15s before. Shooting Mini was nice. It kicks back a little but muzzle climb is not big, but definitely goes to the right side. It has flash hider that is similar in construction to A2. Original muzzle device incorporates chamber to increase pressure for gas system, so it will be hard to change it for anything. Locking pin and necessity to remove it to clean this "chamber" precludes clocking it. I think of having new muzzle device made, that in place of flash hider will have 1/2"x28tpi thread to utilize AR15 muzzle devices. Other issue is stock, that is definitely to low in relation to sights/optic. Tell me what you think!
Posted by Montrala at 12:51 7 comments: Links to this post

Last Saturday we shot last big IPSC Level III match in Lithuania. 12 stages of fun shooting. Stages got what we lacked on Worldshoot - shooting on the move. Also did not get what we all had full of from WS - bobbers. Weather was rather cold but we got some sun for last stages. There was one stubborn popper who first got blocked on base and then did not fall down on reshoot. But got scared of Range Master and felt from calibration shot. A miss. Rules are rules.

Thanks to all match organizers, stage designers and Range Officers. Congratulations to winners in divisions and categories!


Posted by Montrala at 22:04 No comments: Links to this post 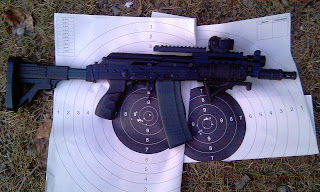 Friday I found some time to brief visit on range, to shoot Mini Beryl. Actually I just wanted to get 50m zero for Aimpoint Micro T1, that I mounted on it. I decided to mount it on handguard, to sit it lower in relation to stock (and bore). This have it's downsides, as hanguard is removable accessory that, while feeling solid, can shift position under recoil resulting in reduced accuracy. But seem like result is good enough (right group is about 2 MOA) for dynamic shooting up to 100m. Both groups are 10 shots with bulk S&B 55gr FMJ ammo at 50m,  rested on backpack and using ISSF 25m pistol target. Sorry for cell phone quality of picture, it was actually taken with... cell phone ;)

I did not have time to do more than some 30-40 shots, but it seems that this small rifle is pleasant to shoot. Trigger, while with long pre and over travel is smooth and clocks less than 5lb from factory. Recoil is significantly stronger than in carbine or rifle length AR15, but barres stays put flat. Probably some work is done by muzzle device, that on back works to increase backpressure in barrel for gas piston to work and in front is shaped in style of A2 birdcage.

As some may notice, I put some tacticool tunings on it, that include flashlight and Magpul AFG. Later is nice addition, given frontal stance with shoulder square to the target is used. For more classical, bladed stance, even with longest setting of stock, handguard is just too short to properly utilize AFG. In this case I recommend using VFG.
Posted by Montrala at 22:57 3 comments: Links to this post 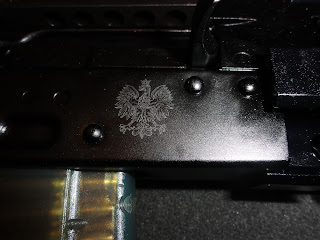 Small family of my firearms was joined by new member.

Read more »
Posted by Montrala at 22:58 3 comments: Links to this post 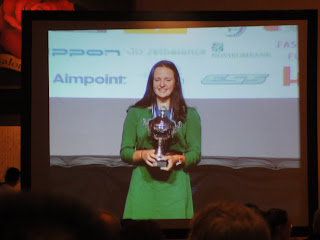 I gave myself a week to get things together and also to get some distance and make cold assessment of IPSC WSH XVI. Of course officially it was great success and everything was great. But not so. Basically it did not work so well at all.

Read more »
Posted by Montrala at 22:33 2 comments: Links to this post

I managed to came back from WSH in Greece, with only small problem. I must cover some important issues and will report back with final summary on IPSC WSH XVI.
Posted by Montrala at 19:37 1 comment: Links to this post

Email ThisBlogThis!Share to TwitterShare to FacebookShare to Pinterest
Labels: Blogging

When registering to the match every competitor got beautifully printed informatory booklet. There are words of wisdom from IPSC President, Chairman of WSH 2011 Organizing Committee, IROA President, IPSC General Secretary and protos of Match Officials.

Then we have schedule of pre-match and schedule of match, with info on Opening Ceremony that is different from info on WSH2011 website, and those both were wrong.

But now we came to funny part. Stage descriptions.

For all those, who are seating on "peanut gallery" (non)watching live streaming video from the XVI WSH and wonder how to fit pieces of published results into stage number - here I provide way to solve this puzzle. Sorry that I did not think about it sooner and sorry for picture quality!


Read more »
Posted by Montrala at 11:30 No comments: Links to this post 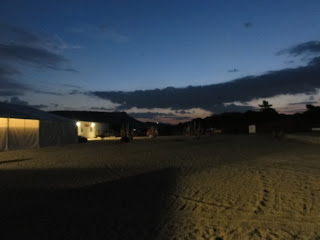 Last day (night?) of shooting. Today stages from 19 to 24. It was my worst day ever, I doubled my Mike count on this day. Those stages were really demanding, no room for mistake or going faster that you can. But bottom line, after shooting all stages, I do not find this match anything special. Maybe EHC2010 in Belgrade spoiled me, maybe Extreme Euro Open or Baltic Storm offer same or more for much less money. I just felt like I paid for Volvo only to find that it is Mondeo with more expensive brand sticker. Of course this match will show new World Champions, but that is all. In my book only stage 23 is "world championship worth" - hardest state I ever shoot (and failed miserably), also greatly build, including all props. Would I came again for this match? No, I would save money to attend some 3 good other matches instead. I just do not feel like I took part of something extraordinary. Not like in Belgrade. But, nevertheless, I had 2 weeks vacation and some shooting on beautiful Rodos island. It's worth something.

Read more »
Posted by Montrala at 13:48 3 comments: Links to this post

In one of previous post I mentioned multiple spectators watching match without any sort of eye (and ear) protection. Also on several stages (that have steel targets!) helpers from Greek Army do not use eye protection. Some were very surprised when competitors asked them to use eye protection. I've seen ROs that does not take any action about this, even when asked to do so. I was wondering why IROA ROs are not reacting. Especially that this match witness lot of things flying in every direction. In my squad two shooters were hurt enough to bleed some amount of blood (one just few centimetres from eye). I was hit several times as well. 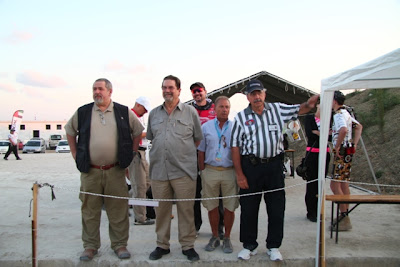 Now I know why it work that way. Example came from the top. This photo was taken on (now cancelled) stage 7, where 2 plates on steel poles were to be hit. RO on this stage got hit on the face with splatter hard enough to receive medical assistance. Gentlemen on picture came to watch squad shooting this stage. Left to right: IPSC Secretary (no eye protection), IPSC President, IPSC General Secretary (no eye protection), IROA President. It is hard to tell on ear protection due to possible use of earplugs. So despite recommendation in rule 5.4.1 it seems that most important IPSC match does not empower rule 5.4.2. Safety first? As far as I remember infamous sweeping on draw/holstering rule proposition, it was pushed because safety was paramount for IPSC Executive Council. Maybe for long term it is better to give good example and pursue use real safety precautions, than mess with rules for PR/political reasons.


Posted by Montrala at 08:00 No comments: Links to this post 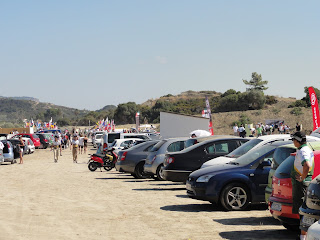 4th day of shooting. Safety negligence on range does not stop to amaze me. It is not possible to allow people on shooting range during even Level I match without eye protection where I use to shot. Here spectators, helpers, even officials do not use eye protection and nobody (except some competitor who encourage people to wear eye protection) seem to care. Tragedy waiting to happen. I will make separate post on this matter, can not leave it like that, seeing people got hit with splatter and ricochets all over me and feeling it myself.

Read more »
Posted by Montrala at 20:23 No comments: Links to this post 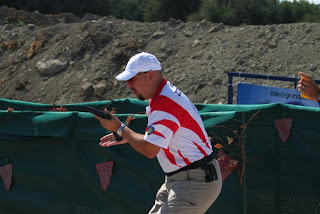 Today I shot stages from 7 to 12. When I was shooting stage we got visited by strong team of spectators consisting of IPSC President, IPSC General Secretary, IPSC Secretary and IROA President. Initially I tough that guys were following my blog and wanted to see me shooting ;) But not :( 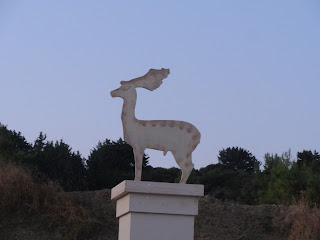 Stage 7 was stage where shooter impersonated Colossus of Rhodes, holding in weak hand torch, strapped by velcro strap to wrist. Most of shooters were removing strap, but when strap was new it took time, when it was worn out, it just required to shake hand. This kind of props were made better at EHC2010 in Serbia, working equall for all shooters. Finally stage was withdrawn from the match.

Read more »
Posted by Montrala at 16:20 2 comments: Links to this post 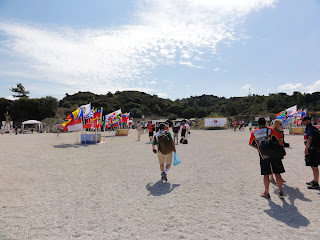 Second day of shooting. This time afternoon. Much, much better. In meantime organisers seem to finish up some props outside shooting area (gate, flags, etc.), more exhibitors in commercial tent.

Today I shot stages 1 to 6, including infamous "labirynth" stage. I liked it, my kind of stage, shooting on the moove, etc. However it did not prevented me from being slow. But on "Zorbas" stage I got ovation from whole squad ;) Helps for ego :D

Read more »
Posted by Montrala at 18:12 No comments: Links to this post 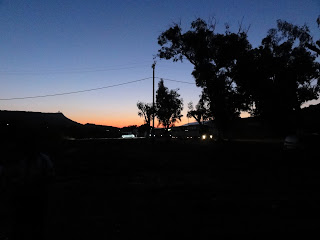 Today, at 0730 hours, we started to shoot XVI IPSC WSH. When we arrived at range it was night. But is soon become day. Click, and there is light. On range additional Safety Areas emerged - good, it would be horror with only two of them. My shooting was so bad, that it just can not go trough my keyboard. But hey! Someone must be last!


We were shooting stages from 25 to 30. Stages were intersting, some even require to think of some tactics. There was a delay by row of equipment failures on stage 26, but we finished on time.

Read more »
Posted by Montrala at 15:15 No comments: Links to this post 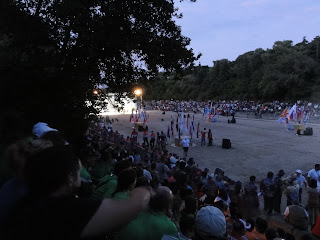 Today was (is) Opening Ceremony. By official webpage from 1600 hours, by information booklet by 1630 hours, by some piece of paper pinned to board at Rodos Palace Hotel (only people lucky enough to stay near could see it) departure for ceremony was scheduled at 1700 hours. Ceremony started about 1900 hours. I, together to my region decided to leave early and we had enought of waiting, standing and then listening to speaches and not seeing anything, because it is already dark. But I took some photos.

Read more »
Posted by Montrala at 19:23 No comments: Links to this post

So we have got ourselves IPSC President. By 26 vs 10 votes Nick Alexakos keeps his power and honors. It could be good, will be as usual. Throwing parties, drinks and foods at Regional Directors proved to be well spent competitors money.

Other news is that next Handgun Worldshoot will be held in United States. This time there was one vote in favour of US against Thailand

Posted by Montrala at 08:46 3 comments: Links to this post

Waiting for info from General Assembly. 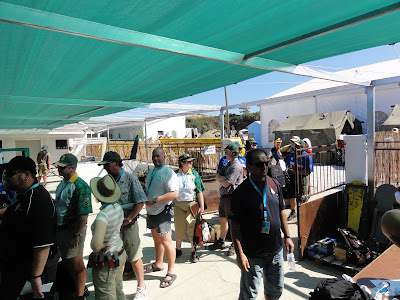 Posted by Montrala at 14:53 No comments: Links to this post